This year being the centenary of the 1916 Revolution, I am busy with several projects on this subject. It’s a period of our history that I’m fascinated by, so I was very pleased to be offered a major commission by Cork City Libraries and Cork City Arts Office as part of their Writings on the Proclamation project. They have invited 4 writers – Theo Dorgan, Leanne O’Sullivan, Hugo Hamilton and I –  to “produce new text, poems, reflections, stories and essays as their personal response to the Proclamation”. I’m working on two new poems based around the proclamation at the moment, and really enjoying the challenge. I’m looking forward to the book that will be published to gather these writings. 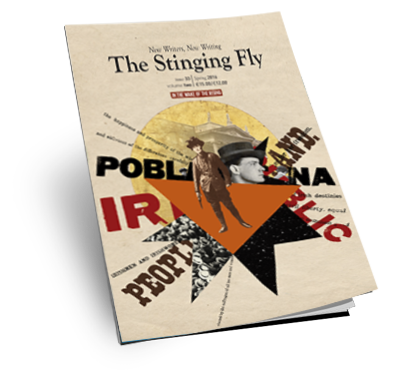 The Stinging Fly is a favourite journal of mine, so I’m looking forward to reading their special 1916 issue. The list of authors who have contributed is impressive and I’m happy to be among them. My poem, ‘[Split Villanelle        [with Torn Tongues]’ deals with our post-1916 ambivalence towards our native language, with rejection and hope. I tried to explode the villanelle form on the page, to reflect the fracture I was wanted to address. Thanks to guest editor Sean O’Reilly, and to editors Declan Meade and Thomas Morris for including my work.

The TV station TG4 commissioned me in February to write a poem as Gaeilge on the theme of 1916. It was a particularly challenging project, as I performed the finished poem at annual Gradam Ceoil award ceremony the Opera House, broadcast live on TV. Pretty terrifying! I came away from the performance with a renewed respect for those who work on TV…

I’m beginning to dabble a little with fiction, it’s fun to experiment with writing in a new form. A short story of mine, told through email, will feature in the next edition of wonderful new literary journal Banshee.  It’s called ‘Inbox:6’, and 1916 has its fingerprints on this piece too. Thanks to superhero editors Laura Jane Cassidy, Claire Hennessy and Eimear Ryan for including my work. If you’re interested in writing that explores themes like “coming of age, sexuality, gender, mortality, complicated relationships of all shapes, the joys and frustrations of the creative life, our relationship with technology, and the extended adolescence of the 21st century”, subscribe here.

Like many writers and artists, 1916 is very much of my mind this year, and I’m sure it’ll be reflected in a lot of my work in the coming months.  I’ve been reading a lot of 1916 themed books as research, these are my favourite 2 so far – At home in the Revolution: what women said and did in 1916 by  Lucy McDiarmid and 1916 Portraits and Lives by  James Quinn, Larry White and David Rooney (both books published by the RIA). I’d also recommend exploring the first hand accounts of people who participated in the Rising at the Bureau of Military History 1913-1921 Collection at the Military Archives online – it’s a fascinating portal into other lives at a time of great change.